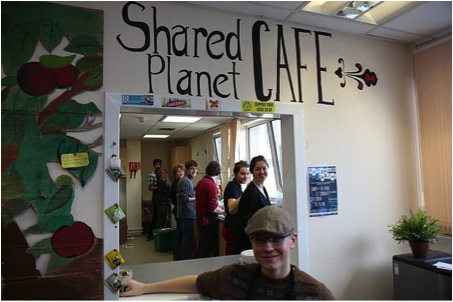 Writing a blog post can be tricky. To help me along the way I googled ‘shared planet’ to get the creative juices flowing. The first few lines of images relate to Starbucks who have adopted the slogan of ‘Shared Planet’. I wonder what those at the student organisation who I want to talk about in this post, who share the name ‘Shared Planet’ would think about this? I cynically question if the two organisations have the same ideas in mind.

Shared Planet is a student association that operates within the University of Aberdeen. It’s an umbrella for three food projects; “Shared Planet Café” (which sells ethically sourced, volunteer-made meals 5 days a week); the “veg bag” (vegetables bought from a local organic farm and wholesaler, bagged and sold at cost price.) and “The Corner” (ethically-sourced food from a wholesaler in Glasgow sold at cost price). In my eyes, there is a political edge or motivation for some of its members; for many, Shared Planet is a campaigning body that tries to bring about change on various issues that are close to their members’ hearts. The Shared Planet projects all share a room in the Student Association building within the University.

I came to Shared Planet as part of the TESS, run by a team of researchers at the James Hutton Institute. As part of this, I spent some time volunteering there. The following are my own personal reflections on being and spending time with the volunteers there.

Shared Planet strikes me as a place where likeminded people go to talk, eat and learn about campaigning. Some go along just for a bowl of soup (which is very tasty too!), or because it’s a nice distraction from study, others go because they want change. For them, sitting back and watching alone won’t make this world the kind of place they want it to be. But let’s be clear, of course many of the members and people who go there have different motivations; of course you can go along and volunteer in the kitchen simply because you like cooking or help organise the veg bag (because you want a discount on the organic veg). I would say though, the undercurrent in that place is political. As I worked in the kitchen I was humbled by the number of issues that people cared about and were willing to invest their time for; campaigning for the right to a living wage, refugee rights, a fossil fuel free world, reducing tax on sanitary items, free Palestine… the list goes on…

Shared Planet struck me as a place of experimentation, to learn about what interests you and what you care about; for some it creates a friendly environment that people feel safe in: a trusted environment that facilitates creativity and allows its members to speak their minds. The strong bonds that are formed at shared planet cannot be ignored, over the years the core team have developed tight relationships. It may put some off, for some it’s a clique, but for others it becomes an opportunity to access a readymade friends network, in a new place, in a new city at a time in your life when you may feel alone.

The people there are a big enticer; the majority are passionate, committed, kind and friendly.

There are 23 official members of Shared Planet but we estimate that about 45 people in total actively participated in the initiative in 2014. About half of the people who join Shared Planet knew each other beforehand and the other half met through being involved. We estimate that one in five beneficiaries of Shared Planet suffer or have suffered from a disability, particularly mental disabilities related to stress or depression. Shared Planet provides a supportive social space for people to work through some of these difficulties. It’s the informal setting, with open minded and non-judgmental people that makes it attractive and a nice place to spend time.

Shared Planet has been quite a success. At TESS we estimate that Shared Planet had 300 customers in 2014 (many of which are returning) and we think that almost all of them are from the local area. Most of the customers are students between the ages of 17 and 24, but some university staff also go along. One day when I was there a small boy came in with his family. Apparently it was his birthday. For his birthday he asked his mum if he could come to spend some time at Shared Planet!

What’s more, Shared Planet also make a profit which they send to other cooperatives to help get them off the ground when they are setting up. The members told me that setting up can be one of the biggest challenges. The free space and kitchen they are provided for by the University, in particular, was and still is fundamental to their operation and success.

I really enjoyed the time I spent volunteering there. I felt very fortunate to do field work and get to spend time with such an inspiring group. As the new student year begins, they will soon be entering in a recruitment phase, like most of the University societies, to get new members, as the old ones leave university. Will they continue to be involved in initiatives like this when they leave university? Competing priorities: jobs, families, less time to volunteer all feature strongly but I’m sure that groups like Shared Planet make the world a better place for many, and plant tiny seeds of change.

The role of community-based initiatives in Rome: the TESS project final event

Posted On November 23, 2016 ~ 0 Comments
After three fruitful years of research, the TESS project is coming to an end. The TESS team is busy concluding the final results based on…

Posted On January 20, 2015
By Liz Dinnie, JHI At present the contribution of community initiatives to carbon reduction is difficult to assess because the data is unavailable, fragmented or…

Posted On June 5, 2015 ~ 0 Comments
On 28th May about 80 European researchers, policy makers and community activists met in the contemporary-Georgian surroundings of the Edinburgh Centre for Carbon Innovation to…