Trèvol: an emblematic courier service cooperative… and much more. 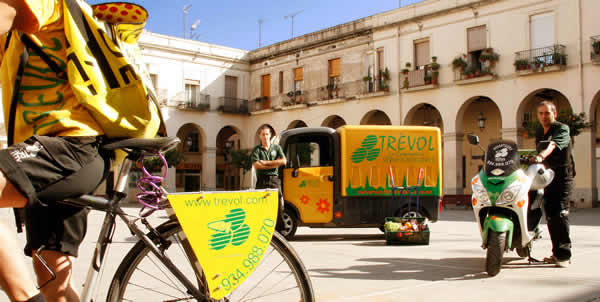 In 1984, the courier services company MRW (illegally) laid off five of its workers after receiving a complaint about poor working conditions. When years later, a trial sentence obliged the company to reincorporate the workers, these rejected to go back to the company. Instead, they founded their own courier services cooperative: Trèvol. Trèvol was formed as a cooperative “to avoid hierarchies and to have control over our working conditions”. Today, 31 years later, the cooperative has 12 members and 17 workers. It is still located in the same neighborhood: The working-class neighborhood of La Sagrera, Barcelona.

Over time, the cooperative has developed a significant sustainability dimension. Soon after their creation and inspired by similar initiatives from Germany, Trèvol started offering courier services by bike. It was the first organization to do so in the Spain. Trèvol was then imitated by different groups in Spain, which, in the 80s or 90s funded bike courier services in Madrid (Trebol) or Zaragoza (La Veloz). In their funding years, Trevol Barcelona helped the other groups actively develop the model in their respective cities. 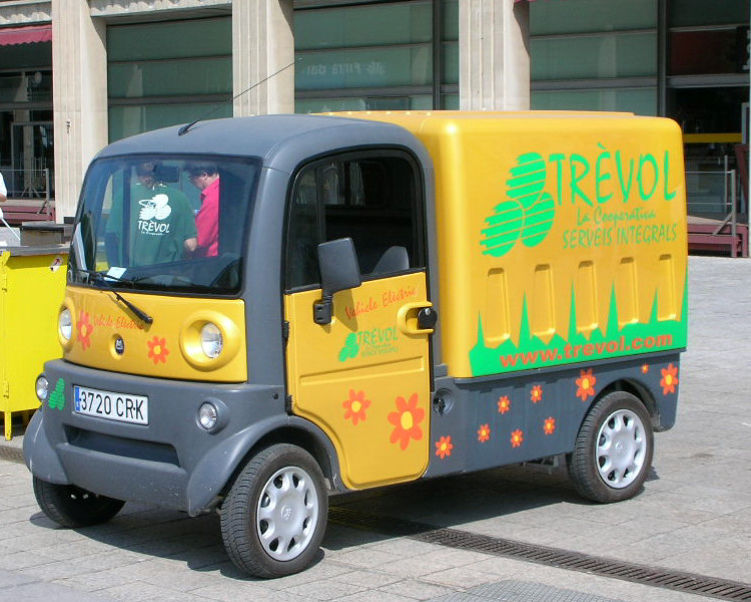 Even though Barcelona as a city has developed in more sprawl-like manner over the past ten years – and suffers from heavy congested streets and roads, – the cooperative has not given up its effort and commitment. Today, its workers still deliver small and medium packages in the Barcelona area by bike, while drivers deliver the packages outside Barcelona that cannot easily be moved by bike. Trèvol cooperative has an electric motorbike and a small electric van, which are used whenever possible to avoid the use of regular vans and trucks.

In addition to the transportation area, the cooperative has also a green cleaning department, ECO-NETEJA. ECO-NETEJA was created in 2010 to reduce the number of toxic substances that end up in rivers, lakes and in the sea, and to reduce the damage that these products cause on human health. ECO-NETEJA offers cleaning services with environmental and health respectful products: 98% of their components are biodegradable and produced with vegetable substances. Over the years, Trèvol has received several awards for its innovative character and socio-environmental dimensions.

Due to its cooperative and sustainable dimensions, Trèvol is well known among other CBIs and environmental organizations. Among others, Trèvol has been hired for the weekly transportation of the products of two TESS food case studies: Aurora del Camp and L’Economat Social. Indeed, one of the most interesting characteristics of Trèvol is its relationship with other initiatives and its participation in a high number of cooperatives and solidarity economy networks. Trèvol is part of the ECOS group, a group of cooperatives socially and environmentally conscious, who have adopted a transformation approach towards societal change. It is also part of XES (the solidarity economy network), More recently, Trèvol has joined Quèviure, a cooperative of food producers and consumers of organic staples. Trèvol is a member of the cooperative and is in charge of its food transportation.

Since the beginning of the crisis, the cooperative revenues have shrunk. Through their recovery paths, Trèvol has lobbied public authorities for new regulations that would be favorable to environmentally and socially sustainable companies and for cleaner cities with more bikes than cars on the roads.

We hope Trèvol continues to be an emblematic courier service in Barcelona, and keeps innovating and strengthening its networks.

Posted On August 3, 2015 ~ 0 Comments
In the many fields of action towards a more sustainable society, the energy system plays an important role. In Germany, the “Energiewende”, the transition towards…

Posted On March 17, 2015 ~ 0 Comments
Finland’s North Karelia region employs over 6000 people work in the forest bioeconomy, including renewable energy, education and enterprises. Annual turnover for the sector is…